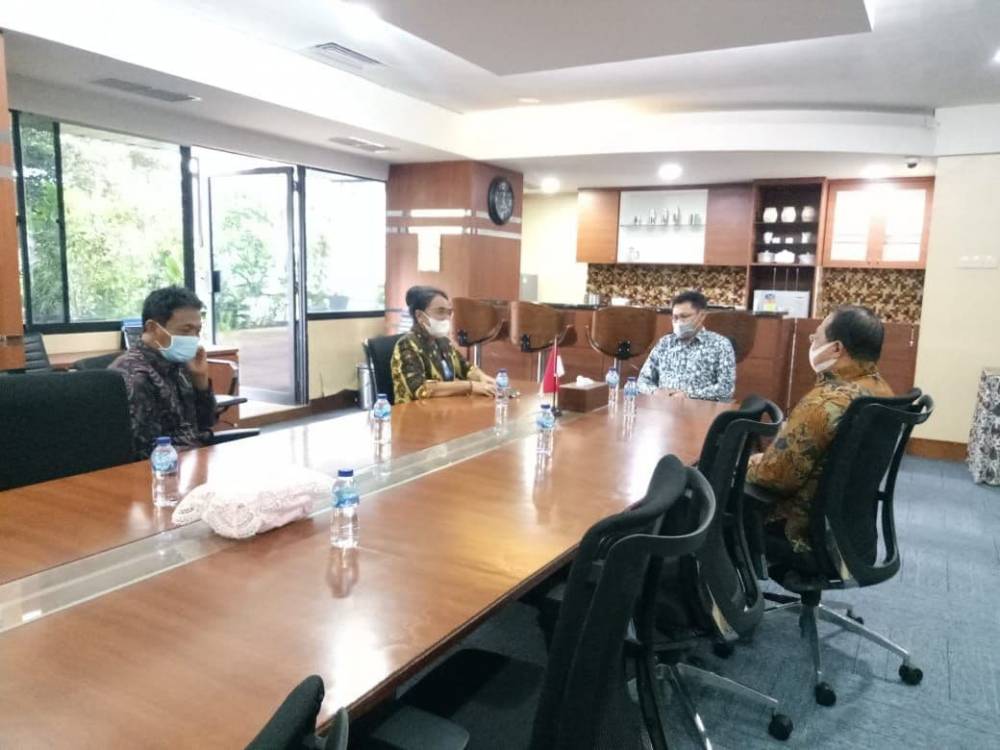 Unud Chancellor Prof. A.A Raka Sudewi, accompanied by the Vice Chancellor for Planning, Cooperation, and Prof. Information. IB Wyasa Putra and Head of BPKU I Wayan Antara held an audience with the Secretary General of the Ministry of Education and Culture Prof. Dr. Ainun Naim. The Chancellor was received directly by the Secretary General at the Secretariat General Meeting Room of the Ministry of Education and Culture, Tuesday (15/12/2020). There were three things conveyed by the Chancellor at the hearing, namely (1) Performance reports on the optimization of cooperation in the utilization of BMN Unud 2017-2020 assets; (2) The need for adjustments to the Ministerial Regulation on OTK Udayana University with regard to various new institutional needs that have not been accommodated; and (3) The plan for the election of the Rector with regard to the end of the 2017-2021 Chancellor's term.

Regarding the performance optimization of Unud asset management 2017-2020, the Chancellor reported that Udayana University has added BMN assets through various collaborations, such as the IBRC collaboration with Tamansari Resot in the form of laboratories and laboratory operational support facilities worth 2.5 billion, the collaboration of Fapet with PT. Charoen Pokphand in the form of a Closed House development grant worth 2 billion, increasing the RSPTN with equipment grants from the Badung Regency Government worth 54 billion; grants for the arrangement of 44 isolation inpatient rooms, 9 ICU rooms and 4 nurse station rooms from the Bali Provincial Government worth 8 billion; transfer and restoration of functions of building and land assets. Institute for Peace and Democracy (IPD) in collaboration with PT. Genah Ring Jimbaran (GRJ) with an investment of 22 billion; additional office assets and spatial planning for the Tourism Confucius Institute (TCI) worth 2 billion in collaboration with Hanban University, Nanchang University and Nanchang Normal University which are the leading universities in China; additional office assets for the Center for Asia Cross-Cultural Institute (CACI) in collaboration with the Chinese Consul General and Beijing University worth 200 million rupiah. So that the total performance value of adding assets for Unud 2017-2020 through cooperation is valued at 90.7 billion, all of which are productive assets that will be a source of new revenue for Udayana University in the future. RSPTN during the Covid era, when college admissions generally decreased, their admissions actually increased. Unud also carried out rescue and restoration of disputed asset status which contained the potential for cooperation covering an area of ??7.7 hectares with an estimated value of 900.01 billion, so that the total asset management performance of BMN 2017-2020 through cooperation was valued at 990.8 billion.

Currently, Udayana University also has the need for organizational changes in institutional arrangements with regard to several institutional elements that have not been included in the OTK, such as the RSPTN, and the USDI are still unit status even though the weight of managed affairs is equivalent to that of an institution.

The Chancellor also submitted a report on the process of electing the Unud Chancellor which will start in March 2021 and is currently waiting for the Minister of Education and Culture's Regulation on the Election of the Rector so that the process can be carried out according to the rules.